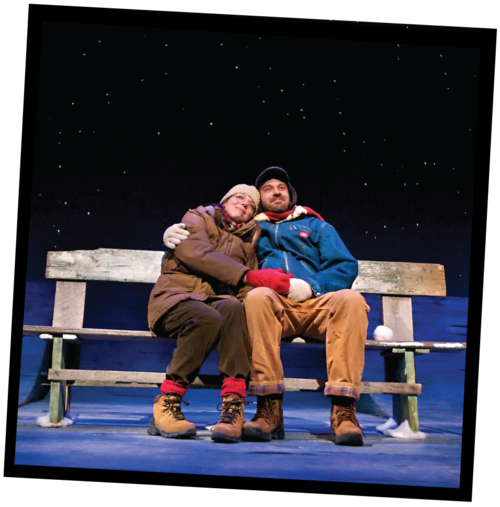 Welcome to Almost, Maine, a town that’s so far north, it’s almost not in the United States—it’s almost in Canada. And it almost doesn’t exist. Because its residents never got around to getting organized. So it’s just…Almost.

One cold, clear Friday night in the middle of winter, while the northern lights hover in the sky above, Almost’s residents find themselves falling in and out of love in the strangest ways. Knees are bruised. Hearts are broken. Love is lost, found, and confounded. And life for the people of Almost, Maine will never be the same.

ALMOST, MAINE: It’s love. But not quite.

ALMOST, MAINE was developed at the Cape Cod Theater Project (Andy Polk, Artistic Director) in 2002, and received its world premiere at Portland Stage Company, where it broke box office records and garnered critical acclaim. ALMOST, MAINE opened Off Broadway in the winter of 2005/2006 at the Daryl Roth Theatre (Jack Thomas/Bulldog Theatrical and Bruce Payne, Producers) and was subsequently published by Dramatists Play Service. To date, ALMOST, MAINE has been produced by nearly 5000 theater companies in the United States (and by nearly a hundred companies internationally) making it one of the most frequently produced plays of the past decade.